Nov 17, 2021
Amadiba Crisis Committee 2021-10-20:
Over 500 from the whole of Amadiba came on Tuesday to the mountain above the Xolobeni Komkhulu (Great Place) in Mbizana, Eastern Cape, listening to political parties canvassing for votes.
For the first time we had an event live streamed on Facebook. Visit Amadiba Crisis Committee Facebook to watch and listen to promises, laughter, speeches and questions.
APC, ATM, EFF, UDM and an independent candidate had accepted the invite. ANC was absent.
Participants from Sigidi left in the middle of the community indaba after a call from the village for help. Sanral had sent consultants to Sigidi to work without permission for the second day in a row.
As a result of this incident, ACC supported a suggestion to the politicians to take a Manifesto to the Parliament in support of the Xolobeni struggle and development that starts from the people: Against open cast sand mining and against putting the N2 Toll Road on the coast. But also against the plans for a “Smart City” and big hotels that have been put in a secret and separate 2020 SDF document that surfaced in June.
On Monday 18 October, the day before the indaba, a Sanral consultant tried to get signatures from the homesteads that will have to move houses, agriculture and/or graves if the 80m wide and fenced 120km/h highway will run 3km from the coast, dividing Sigidi, Mdatya and Bekela villages in two parts.
People told this consultant that he had no right to work in Sigidi. There is no community agreement with Sanral. On 10 September, MEC Babalo Madikizela called in Public Order Police from Lusikisiki to Sigidi. He got an agreement with the Mzamba Taxi Owners Association and businessmen. It has nothing to do with the community.
The consultant said he understood and agreed. He left. After three hours he came back. The villagers gathered again. And again he left after long discussions.
Next day on Tuesday 19 October when Sanral knew that the whole coast had a community indaba in Xolobeni, other Sanral consultants arrived to Sigidi. They were guided by a member of Mzamba Taxi and a local mining director. People gathered and the work stopped. The leading mining supporter first agreed that the consultants had no right to be there, but then started to insult the elders.
The team hired by Sanral finally left.
Sanral tries to divide and rule, pushing people to fight. It is the old tactics of the apartheid government. We have many times told Sanral to respect customary law. This is about the land of whole villages on the coast. Sanral prefers to go secretly from house to house, like a small political party canvassing for votes before the local election.
ACC is working with friendly experts to get the N2 project moved inland in Amadiba. We will put forward a proposal to President Cyril Ramaphosa and the Minister of Transport, Mr Fikile Mbalula.
ENDS 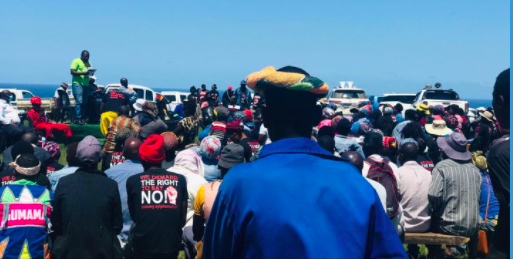 Photo from the community indaba by Zolile Shude 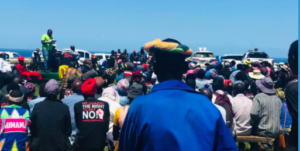 Support the AOU Demand for a Basic Income Grant!